When Jane Moore first fell ill, about two months before her untimely death in March 2004, she was working on the concluding chapter of her PhD thesis.

To get this far had been a long and hard battle, both with the data and with herself, but aggressively-metastatic skin cancer prevented her from completing the work.

Jane's doctoral research at University College London (UCL) investigated what both genetics and craniometrics can tell us about the relationships and history of modern and ancient populations of Sudan. 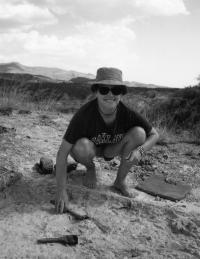 Born in 1962, Jane grew up in Little Rock, Arkansas. As an archetypal tomboy she very much enjoyed exploring the wilderness that was part of the family farm in western Arkansas; experiences that shaped her eagerness for fieldwork in later years.

Her father, a neurosurgeon with interests in all things anthropological, was a major influence, laying the basis for Jane's eventual career choice. Initially, however, she only briefly attended university. Full of energy and wanting to be independent, she embarked on a successful business career in medical database management.

She moved to San Francisco, and lived the 1980s boom years to the full. But in the end there remained the question whether this was truly what she wanted to do with her life. Consequently, she went back to university in the early 1990s, working shifts on the maternity ward of UCSF hospital to fund her studies.

In 1994 she graduated from the University of California at Berkeley with a BA in anthropology. During that time she did projects in palaeopathology and taphonomy, in part during a summer internship at the Smithsonian Institution under Donald Ortner. In the last year Jane was taught by Jean Jacques Hublin, who invited her to participate in his 1994 summer fieldwork in Zafarraya, southern Spain. This is where we met, with the result that she moved to London later that year.

At Berkeley Jane had reviewed the literature on the taphonomic conditions for the survival of DNA in bone and teeth. Now she wanted to pursue this further, and for a year she worked under Erika Hagelberg at the University of Cambridge, to learn the practicalities of DNA extraction and sequencing.

At the same time she made contact with Peter Andrews at the Natural History Museum in London, and he allowed her to use specimens that were part of his long-term taphonomic experiments (Moore, 1996). Spring 1996 proved a roller coaster, combining the diagnosis of malignant melanoma, albeit at the time without apparent metastases, and the award of a National Science Foundation Graduate Research Fellowship. The latter enabled her to start her PhD research at UCL, with Chris Dean and Mark Thomas as her supervisors in the Anatomy and Biology departments, respectively.

After some further exploration of the topic of DNA preservation (Moore, 1997; Thomas and Moore, 1997), Jane had the opportunity to work on DNA samples of modern Sudanese populations. The idea arose that the Y chromosome information could be combined with the evidence from craniometrics to investigate the large diversity in a country that forms an interface between Arabic and sub-Saharan African cultures and populations. How do modern populations in Sudan relate to each other, and could the findings best be explained by models of regional biological continuity, or migration? Associated questions concerned the relationship between extant populations and those representing past Nubian cultures, and how the evidence from the two different approaches, genetic and morphological, compare.

In practice, Jane had taken on two projects that proved complex to integrate. Analysis of the genetic samples made rapid progress, and she could present preliminary results at a conference in Khartoum in 1998, and at subsequent occasions (Moore, 2000). However, it soon became clear that osteological collections matching the genetic samples do not exist. Instead, she found crania from regions of Uganda, Kenya and Ethiopia, which could arguably be used as proxies for peripheral northern and southern Sudanese populations. In addition, she sampled three Nubian populations, which gave the opportunity to assess models of regional continuity. She found that genetic and multivariate morphological analyses are consistent in showing broad north-south differences (Moore, 2002). Moreover, both suggest that migrations played a substantial role in the population history of the Sudanese region.

Setbacks with getting her projects organised, and various health problems hindered progress of her work over the years. However, that did not hold her from using her infectious enthusiasm and organisational skills to make things happen. She ran a most successful weekly seminar series for the Evolutionary Anatomy Unit at UCL, arranged free textbooks and journal subscriptions to aid physical anthropology in Sudan, was editorial associate for the Journal of Human Evolution, and established an on-line backpackers bulletin board, which is now used daily by many people to exchange worldwide travel information.

Over the years she keenly participated in palaeontological and archaeological fieldwork in Olorgesailie and Kanapoi (Kenya), and she was in the process of organising her own excavations in Sudan, in collaboration with her colleagues in Khartoum. That, she felt, would both help answer questions arising from her doctoral work, and stimulate anthropological research in Sudan done by the Sudanese. It was not to be. A life too short, but well lived.